Sing along with Central Collegiate at 'Emma - A Pop Musical'

Central Collegiate Institute (CCI) students are hosting their annual musical this weekend, at the Centennial Auditorium.

“It’s a jukebox musical with a lot of famous hit songs, written by female [song]writers,” says Isabelle Eros, the lead in Emma. “It’s about Emma... She is a self-proclaimed matchmaker who is trying to find a match for Harriet. She is kind of oblivious to her own business and just focuses on everybody else.”

The play is loosely based off of the 1815 fictional novel by Jane Austen.

“It’s filled with drama, comedy, and a lot of romance,” Eros added. “It was really fun to put together, and a lot of fun singing the songs, and doing the choreography."

About 40 students worked together to make the show happen.

“[We’ve got about] 20 to 30 people [in our cast], and this year, we also have a pit band and running crew, so with all of that together, about 35 to 40 students,” explained cast member, Presley McLeod. “Most of our pit band is made up of students as well, but we have a couple of adults there to help out.”

The support from CCI’s young ambitious students was a key contributor in making the play work.

All the songs featured in ‘Emma - A Pop Musical’ are hits from the 1960s, up until the 2010s. The audience will be able to sing along to the popular recognizable songs, heavily written by female artists.

Tickets are available in person at Central Collegiate, or online at SaskTix. 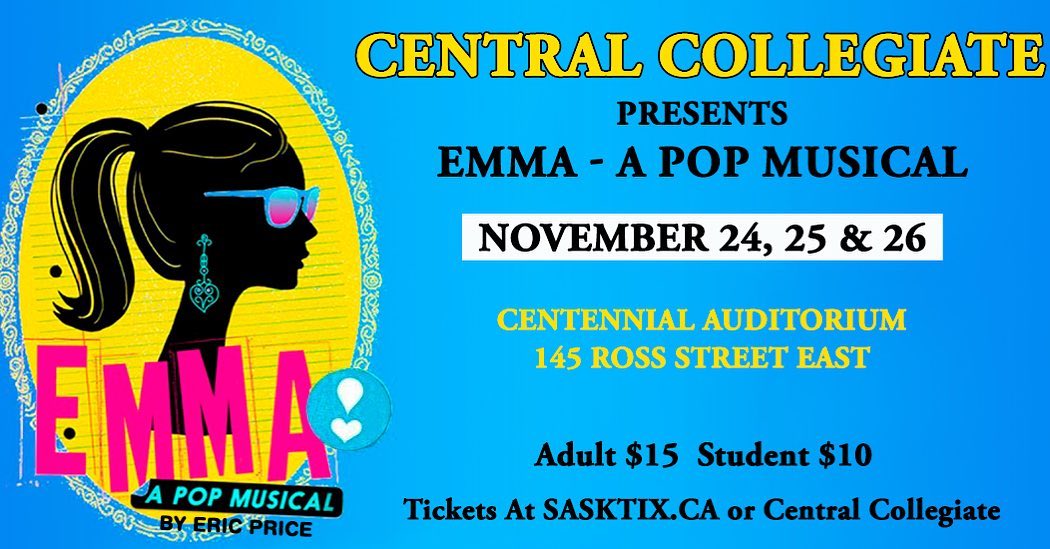